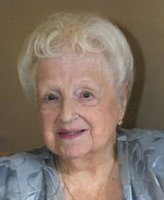 Of Morningside on Monday, September 23, 2019, age 95.  Beloved wife of the late George Howard Claus; mother of Kathy Topper (Dave) and the late Peggy Pryor (Ted); grandmother of 5; great-grandmother of 7; sister of Shirley Fosnight (the late Tom) and the late Raymond Sporman; also survived by nieces and nephews.  Marge was past president of the Morningside VFW Ladies Auxiliary.  She loved to travel and was affectionately known to her grandchildren as “Grandma Schwarzenegger.”  Friends received at McCabe Bros., Inc. Funeral Home, 6214 Walnut Street, Shadyside on Thursday, 2-4 and 6-8 pm, where Funeral will commence on Friday at 9 am, followed by Mass of Christian Burial in St. Raphael Church at 10 am.  Condolences may be left at www.mccabebrothers.com