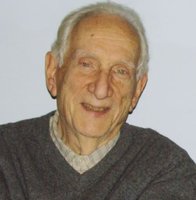 Benito Lombardi Age 91, died on Friday, January 24, 2020. Born in in Rovigo, Italy, about 50 miles from Venice. Benito was the 4th youngest of 13 children in a family that valued education. A studious boy with a keen interest in how the world worked, he received his degrees in the medical sciences from the University of Padua, Italy, and began a life of teaching and research, with a focus on experimental pathology. Benito was inspired to pursue his dreams with determination and discipline. He left Italy for the University of Toronto, Canada, in the mid 1950’s to pursue greater scientific opportunities. After returning to Italy to marry his sweetheart, Dilva, Dad and Dilva moved from Toronto to the University of Cleveland, and then to the University of Pittsburgh where he was an experimental pathologist and a tenured professor of Pathology at the Medical School for over 30 years until his retirement in 1995. In 2008, the Department of Pathology created the Lombardi and Shinozuka Experimental Pathology Research Chair in recognition of contributions that he and his colleague, Dr. Hisashi Shinozuka, made to the field of experimental pathology. Dad traveled throughout Europe and Japan for his work, and enjoyed exposure to different cultures and customs. He enjoyed classical music, opera, and chess. He played tennis in his youth, and enjoyed watching the Tennis Channel once he became less active. He loved to fish; the Outer Banks were a frequent family vacation destination. He was also creative and loved to work with his hands, enjoying hobbies including lava stone sculpting, super 8 movie filming and editing, woodworking and remodeling. In retirement, he dove into computer coding, and also created an opera history website “An Internet Book on Opera”. Dad and Dilva had three children, Gabriella (Lella), and Laura and Richard. Benito is survived by his daughters, brother Mariano, and an extended family of nieces, nephews, and their children in Italy. All funeral arrangements are private. In lieu of flowers, the family suggests a donation to the Alzheimer’s Association.