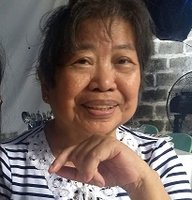 Milagros “Mila” Cordero Barron, formerly of Hixson, Tennessee, passed away peacefully on January 17, 2020, after a brief illness in Pittsburgh, Pennsylvania. She was born Milagros Mendoza Cordero in 1946 to the late Jose and Visitacion Mendoza Cordero in Lipa City, Philippines, and immigrated to the US in 1975. In 1978 Mila married the late Daniel Barron. Their marriage was full of love and laughter, and for Mila, lessons in polymers, driving a car, and American-style cooking. She worked many years as a polymer chemist at Alco Chemical, first in Philadelphia and then in Chattanooga, and her inventions there were awarded numerous patents. She greatly enjoyed cooking, fresh seafood, watching her favorite sports teams, and the company of her daughters and friends; recently, she returned from a much-treasured trip to see her brothers and family in the Philippines. Mila is survived by her daughters, Kathleen Barron of Pittsburgh and Sara Barron (Jonathan Petrie) of Braintree, Massachusetts; her brothers Amado Cordero (Ledesma) of Lipa City, Philippines, and Juanito Cordero (Nieves), of Sablayan, Philippines; and many aunts, uncles, cousins, nieces, and nephews, throughout the Philippines and the US. She was predeceased by her husband, her parents, and her brother Theodolfo Cordero. A Mass of Christian Burial will be celebrated at St Jude Catholic Church, Chattanooga, Tennessee, on February 10, 2020, at 11 am, and interment will follow in the church columbarium. Condolences may be left at www.mccabebothers.com