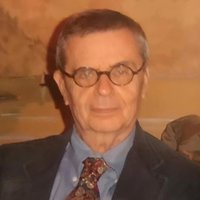 Joseph M. Kissane Age 89 of NYC, passed away from Covid-19 on April 19, 2020. He was born on Dec 4, 1930 in Pittsburgh PA, the son of the late Joseph Jr. and Kathryn E. Kissane. He was preceded in death by his sister Kathryn A. and brother Michael A. He is survived by sister Marianne DeBarbadillo (Jack) of WVA and brother Thomas of Pittsburgh as well as 10 nieces and nephews and many great-nieces and nephews who were greatly loved. Joseph was a graduate of Central Catholic and Duquesne University and served in Korea as a 2nd lieutenant. After his service he continued his education at Columbia University, earning his Masters and PhD in 17th Century English Literature. He worked at Columbia, first as an instructor and then as an administrator, retiring in 1997. Joe enjoyed traveling, with England being his favorite destination. Joe helped at a soup kitchen in his neighborhood and was always caring for the less fortunate. Joe enjoyed the theaters of New York, including the Theatre for a New Audience, the Roundabout Theatre Company, The Irish Repertory, and of course on and off Broadway. Joe was a man of wisdom and compassion with a great sense of humor. He will be missed by his family and his many friends in NY and London. A Mass of Christian Burial will be held in Sacred Heart Church, Shadyside, on Saturday at 9 am. Inurnment to follow at Calvary Cemetery. Arrangements by McCabe Bros., Inc. Tributes and condolences may be left at www.mccabebrothers.com