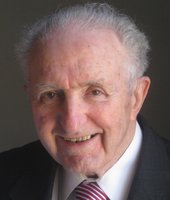 John William Tierney of Highland Park, aged 96, died peacefully on Tuesday, August 25, 2020 at his home, surrounded by his family. Jack, as he was known, was a loving husband and father, a World War II veteran, a lector at Sacred Heart Church, and a chemical engineer who published more than 75 research papers during a career that took him to three continents. He was a professor at the University of Pittsburgh for more than three decades and continued as an emeritus professor to direct energy research projects. Jack, who grew up in the Chicago suburb of Glen Ellyn, graduated from Fenwick High School in 1941 and won a citywide prize in Chicago for scholastic excellence, the All-American Catholic Boy award. During World War II, he was a sergeant in a U.S. Army engineering regiment deployed to Persia (now Iran), Belgium and Germany. After graduating from Purdue University in 1948 with a degree in chemical engineering, he earned a master’s degree at the University of Michigan and a doctorate at Northwestern University. In 1952 he married Patricia Anne O’Neill in Chicago. During the 1950s he worked as a senior research engineer at Pure Oil’s laboratory in Northfield, Illinois, taught engineering at Purdue, and became manager of the process control department at Remington Rand Univac in St. Paul, Minnesota. In 1960, he and his family moved to Chile so he could join a project led by Pitt to develop a graduate engineering program at the Federico Santa Maria University in Valparaiso, Chile. At the end of the family’s grueling two-day plane trip to Chile – with four young sons, including a five-month-old infant -- Patricia told Jack, “I hope we like it here, because we’re never going back.” Shortly thereafter, the family lived through Chile’s Valdivia earthquake, the most powerful earthquake ever recorded, and the Pittsburgh Post-Gazette published an article headlined, “4 Pitt Educators Escape Disaster.” Jack remained in Chile for two years, delivering lectures to students in Spanish. In 1962 he returned to become a professor at Pitt. He served as an adviser to the U.S. State Department in developing engineering education in Argentina, and in 1968 he received a Fulbright award to spend a year in Spain lecturing at the University of Barcelona. After he retired from teaching at age 70 in 1994, the university established a John W. Tierney Scholarship in his honor, and he continued directing research projects at Pitt into low-pollution fossil fuels over the next two decades as part of a multi-university research consortium funded by the U.S. Department of Energy. Jack is survived his loving wife, Patricia, who developed and supervised a program in the Pittsburgh Public Schools for gifted secondary students; his sons John (Helen Fisher), Patrick (Jane McCafferty), Joseph (Romaine Stephen), Paul (Michelle Youngers); his sisters, Therese Brennan, Agnes Prindiville, and Marie Croft; his brother, Edward; twelve grandchildren, and seven great-grandchildren. The family will receive friends on Friday, August 28, from 5 to 8 p.m. at the McCabe Brothers Funeral Home in Shadyside at 6214 Walnut Street. A Mass of Christian Burial will be celebrated at 1 p.m. Saturday at Sacred Heart Church in Shadyside. Condolences may be left at www.mccabebrothers.com