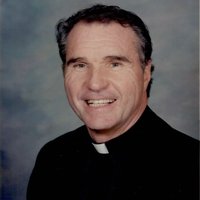 FROM THE O’MALLEY FAMILY: WE ARE INCREDIBLY TOUCHED BY THE OUTPOURING OF LOVE AND SUPPORT FOR US ON THE LOSS OUR BELOVED JACK. WE UNDERSTAND THE DESIRE OF MANY TO ATTEND THE MASS BUT THERE WILL BE LIMITED CAPACITY AND WE HOPE THAT WILL NOT BE EXCEEDED AND THAT PEOPLE WILL BE TURNED AWAY. WE ASK THAT AS MANY PEOPLE AS POSSIBLE ELECT TO VIEW THE MASS LIVESTREAMED ON THE PARISH FACEBOOK ACCOUNT “BESTPGHPARISH” OR THROUGH THE LINK ON THE PARISH WEBSITE BESTPGHPARISH.ORG AND EXPRESS CONDOLENCES AT MCCABEBROTHERS.COM THANK YOU FOR YOUR CONSIDERATION AND MAY GOD BLESS YOU. Fr. John J. "Jack" O'Malley Died peacefully at home on Friday, September 11th, 2020 in Pittsburgh, PA at the age of 83. Fr. Jack O’Malley is survived by siblings, Patricia Paolini, Youngstown PA, Thomas O’Malley, Cypress California, and Mary Jane Diamantopolus, Margaret O’Malley and Mark O’Malley, Pittsburgh PA. He is preceded in death by his beloved parents Patrick and Mildred O’Malley and elder brother Patrick O’Malley. The family would like to acknowledge and thank Marcia Snowden for her companionship and kind and compassionate care. Fr. Jack was a Pittsburgh native born November 17th, 1936 in Pittsburgh’s Strip District. Jack O’Malley was the fourth of seven children. He started his education in St. Patrick’s Parish until his family moved to Morningside where he attended St. Raphael Grade School followed by an illustrious athletic career at Central Catholic, graduating in 1954. Jack was an original member of the Morningside Bulldogs Football team in 1950-51. He attended St. Francis College on a basketball scholarship graduating in 1959 and was the Captain of the 1958 NIT Frankies. He was president of his class and received the Mr. Frankie Award. In 2017 Fr. Jack received the St. Francis University Spiritus Paenitentiae Award. Jack turned down an offer to join the Detroit Pistons and went to St. Vincent Seminary in Latrobe finishing with a masters in 1965. Father Jack was ordained as a Roman Catholic priest May 1, 1965 by Bishop John Wright. He celebrated his first Mass in his old neighborhood, at St. Raphael Church in the Morningside neighborhood of Pittsburgh PA. His first assignment was in Manchester where he remained for fifteen (15) years. Fr. Jack believed that his calling meant more than sermons and Holy Names banquets. He felt that clergy belonged to the people and that the gospel should be put into action. Fr. Jack was an integral part of every community he served as well as displaying an unrelenting commitment to social justice through activism. Fr. Jack marched in countless picket lines promoting social justice, education desegregation, and was vehemently opposed to the Vietnam War. Father Jack was a vanguard against racism and called on all people to acknowledge the subtle violence that racism and discrimination perpetuates. He carried his search for racial equality forward and was heavily involved in the labor movement starting with the United Farmworkers Union and culminating as the Labor Chaplain to the AFL-CIO in Pennsylvania. Fr. Jack O’Malley also helped form the Thomas Merton Center and the Association of Pittsburgh Priests. His compassion for the humble and poor was not confined to his parish assignments, he made several visits to Central America and was with the Witness for Peace Organization in Nicaragua, Honduras and Haiti. His parishes served included Manchester, St. Joseph’s on the Northside from 1965-1978, he was a parochial vicar at St. Rosalia’s from 1979-82, pastor of St. Mary in Lawrenceville from Nov. 1982 to June 1990. After taking a sabbatical at Notre Dame from 1990-91, Father Jack served St. Aloysius in Wilmerding in various capacities from 1991-1994 and the combined new St. Jude the Apostle from Feb. 1994 to Jan. 2001. Jack O’Malley is a member of Central Catholic’s Hall of Fame. In 2002, he was inducted into the Western Chapter of the Pennsylvania Sports of Fame, and was awarded the key to the City by Mayor William Peduto in 2018, along with many other accolades and awards. Friends and family will be received at McCabe Bros., Inc. Funeral Home, 6214 Walnut Street, Shadyside on Tuesday, 5-8 pm and Wednesday 3-8 pm. Masks, social distancing and a limit of 25 persons in the funeral home at one time will be required due to current Allegheny County rules in effect. Translation to St. Raphael Church on Thursday at 10 am with Mass of Christian Burial at 11 am. In lieu of flowers, it would be Jack’s wish to please VOTE! Condolences may be left at www.mccabebrothers.com