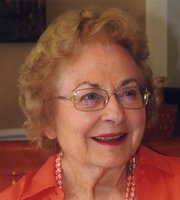 Gently, and without warning, on Sunday, October 4, 2020 at age 98. The daughter of the late Michael and Mary Cerveris, Ellen grew up in Dormont in a lively household that was always full of extended family, beautiful music, and the smell of signature Italian cooking. She met and dazzled the love of her life, the late Anthony C. Troiano, when she swept into his law office, wearing her prized fur coat, to consult with him about a fender-bender. They married and settled in the East End, where they were active, respected, and influential members of the local community. Ellen always knew that she wanted to be a teacher and had graduated from Carnegie Tech with a degree in home economics. She went back to work when restrictions against hiring married teachers were lifted, not because she had to but because she wanted to, teaching home economics at Peabody High School and then, for many more years, at the Western Pennsylvania School for the Deaf in Edgewood. Ellen was a meticulous master of her craft: she could trim an apple with a paring knife in one long, unbroken strip without even looking; her pie crust was lifechanging. Even her penmanship was elegant. She always wanted everything to be “perfect,” and because she had such a clear and certain idea of what that meant everything usually, eventually, was. People most often describe Ellen as “a real lady.” She had the mind of a good bridge player—even, observant, sharp, and appreciating that life is a partnership endeavor—until the end. She made friends easily and everywhere. A longtime Republican, she quietly changed her voter registration in 2016, at the age of 94, out of sheer embarrassment. She was true north in a wildly spinning world. Ellen touched the lives of so many people in her long life. She was predeceased by her parents and brothers Albert, Ernest and John Cerveris, and is survived by her brothers Donald Cerveris of Novato, CA and Michael Cerveris (the late Jan) of Pittsburgh, PA; her children, David Troiano (Carol) and Mary Beth Buchwach (Don Breitbarth); her adored grandchildren, Tracy Wilson, Tony Troiano, Amy Davenport (Brad) and Andrew Buchwach (Syeda); and her treasured great-grandchildren, Lindsay, Jaime, Brooks, Nelle, and Clark. Ellen always took care of others, and the family is grateful to the staff at Concordia of the South Hills for their affectionate care when she was no longer able to look after herself. Please vote in her memory and, if you would like, donate in her name to the Concordia South Hills facility’s Staff Appreciation Fund. Friends received at McCabe Bros., Inc. Funeral Home, 6214 Walnut Street, Shadyside, on Friday, 9:30 to 10:30 am, followed by Mass of Christian Burial in St. Mary Magdalene Parish, St. Bede Church at 11:00 am. Entombment to follow at Jefferson Memorial Cemetery. Allegheny County requires masks, social distancing and a limit of 25 persons in the funeral home at one time. Condolences may be left at www.mccabebrothers.com