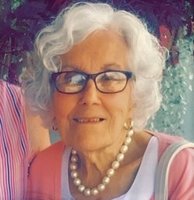 Maria Falcone Gelormino Of Pittsburgh on Tuesday, December 22, 2020. Preceded in death by beloved husband Louis C. Gelormino; mother of Alice V. Gelormino, Mary Ann Murphy (late Bob) Louis N. Gelormino (Nadine); grandmother of Max Murphy (Jamie), Louie Gelormino (Barbara), Allison O’Malley (Jack), Tony Gelormino (Autumn) and Natalie Murphy; treasured great grandmother to Mackenzie, Jake, Gus, Morgan, Josie, Annie, Malorie, Vinny, Patrick, Gianna, Alice, Louie and great grand pup Weezy. Maria was the daughter of Filippo and Vittoria Falcone of Caserta, Italy. The oldest of 7, she lovingly adored her siblings, the late Lucia, Alfonso, Gianni, Lidia, and survived by Assunta and Giovanni Battista Falcone still residing in Italy. Maria truly loved her family by marriage. The Gelormino, Born and Westwood families gave her a home away from Italy. She is survived by her dear sisters and brothers-in-law Joe and Felicia Gelormino, Lucy Born and Mary and Fran Westwood. Maria loved her late parents-in-law Nicholas & Alice, brothers and sisters-in-law John and Helen, Amato, and Bernie. She loved her Falcone and Gelormino nieces and nephews with all her heart. Maria fell in love and married US Army Infantry Solider Louis Gelormino who was fighting for the Allies during World War II. She left Naples, Italy to arrive in New York via the SS Thomas H. Barry and bravely embarked on her new life with her in-laws while patiently awaiting the return of her groom. Maria built a loving family using her artistic insight and her talents of cooking, baking, and gardening to exemplify her proud Italian heritage and display her love for America. It is only fitting that she lived through the historic and remarkable year of 2020. She survived Fascist Italy to become a U.S. citizen which was an honor she did not take for granted. Maria was a proud member of the Greatest Generation and lived a life that exemplified that sacrifices are worth making and risks are worth taking. Maria will be remembered by her family with adoration but most notably for her strength, wisdom, and strong Catholic faith. A Mass of Christian Burial will be held at St. Jude Parish, Sacred Heart Church on Monday at 10 am. Contributions may be made to the Little Sisters of the Poor. Arrangements by McCabe Bros., Inc. Condolences may be left at www.mccabebrothers.