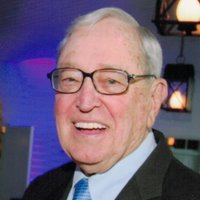 Passed away in the early morning hours on Friday, April 2nd, 2021 after a courageous journey with Alzheimer’s. He was married to Helen for 62 years, together they raised their four daughters, Kathy, Krissy, Kari, and Jackie. Jack and Helen were lifelong Steeler fans and season ticket holders for 42 years. They were lucky to have travelled to many of the Steelers Super Bowls over the years. Jack was an avid golfer and played every Tuesday and Thursday with the Pennboys Golf League. His fondest golf memory was playing St Andrews in Scotland with his longtime friend Joe. His golf friends brought him so much joy even after the days that he could no longer play, they were wonderful friends. Jack loved cars, he loved driving cars, buying cars, and talking about cars- including telling you what car you should buy! Jack deeply enjoyed a good meal, red wine, a “good” Single Malt Scotch, a cold beer, and traveling the world with Helen and friends. His breakfasts with Paul and dinners with Patty were some of his favorite times. Jack, however, did not appreciate drivers who did not use their blinkers, slow drivers, waiting for a table at a restaurant, waiting in the doctor’s office…well any waiting really! Jack was never late for anything; in fact, he was typically an hour early! With eleven grandkids there was always something going on, sports, plays, concerts, and weddings. Alyson, Lauren, Adam, Julia, Tessa, Sircey, Quincey, Corby, Keegan, Campbell, and Kathryn were a source of pride to him. He often bragged about their achievements to his friends, he was immensely proud of each of them. During the last six years, Jack lived with this terrible disease, but he found tremendous comfort attending the program at BriTe. The BriTe program offered him a wonderful place to enjoy friends, music, art, exercise, and a place to look forward to going each day. As his disease progressed, we were blessed to have Gallagher Hospice Services and amazing home caregivers: Heather, Janet, Michele, and Natasha. A couple of months ago, Gallagher Hospice also joined the care team for Jack. Jacks’ memory will be strong in the hearts of all those who loved him, his children, grandchildren, and his many friends, but most of all by his loving wife, truly a hero to him and to so many others. Godspeed Dad. Friends will be received on Monday, April 5th from 3-7pm at McCabe Brother Funeral home, 6214 Walnut St., Shadyside. A Mass of Christian Burial will be held at 10 am, Tuesday, April 6th, in St. Jude Parish, Sacred Heart Church Shadyside. In lieu of flowers contributions can be made to BriTe: 201 Highland Avenue, Pittsburgh, Pa 15206. Condolences may be left at www.mccabebrothers.com