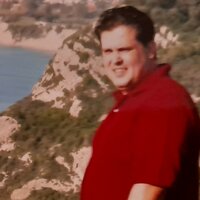 Russell J. Paras Of Stanton Heights on Sunday, October 31, 2021, age 49. Beloved father of Russell A. Paras, Rosalia Margherita Paras and Leo Paras; former loving spouse of 24 years to Nancy Lee Paras; son of the late Lillian G. Paras and Orestes J. and Arlene Paras; brother of Maria Minsinger (Will), Katherine Paras (Roger Jutras), John Paras (Diana), Debra Ciotola, Lilly Paras, Anthony Paras (Kathleen), Connie Jennings (John), Dean Paras (Melissa) and Michelle Lapinski (James); also survived by nieces and nephews. Russ was a kind-hearted soul and went along with whatever you wanted to do. He was fun to be around and was quite the jokester, always saying something under his breath until you finally caught on to what he was saying and would make you laugh. Russ was skillful and a great painter. He knew his trade and was always willing to share his tips with you. Russ’s motto was, “If no one has told you today, I love you.” He was an avid Steelers and Penguins fan and enjoyed working out. He will be missed dearly and is resting in peace in the loving arms of our great almighty Lord Jesus Christ. Friends received at McCabe Bros., Inc. Funeral Home, 5300 Penn Avenue, Bloomfield on Thursday, from 4-8 pm with Trisagion Service at 7 pm. A Funeral Service will be held at St. Nicholas Greek Orthodox Church, Dithridge Street, Oakland, on Friday at 11 am. THOSE WISHING TO ATTEND, PLEASE GATHER AT THE CHURCH. Interment private. Condolences may be left at www.mccabebrothers.com