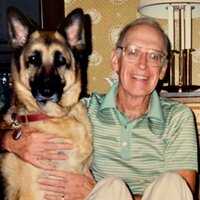 Joseph H. Miller Joe Miller hated long goodbyes. He reminded us of that at every event from weddings to family dinners. True to his word, he left us on Monday, November 8, 2021, just two weeks after he reluctantly went to the hospital for his diagnosis. Joseph Hilldorfer Peter Miller was born on December 28, 1925 and was the adored son of Marie Hilldorfer Miller and Wilfred Miller. He is predeceased by his beloved wife, Mary Patricia (Mulvaney) and survived by three children, Mary Joanne Miller (Joseph Devine), Joseph Wakefield Miller (Bonnie), Gretchen Anne Hammond (Jeffrey), nine grandchildren, Theresa Marie Miller Sporrer (Shane Gilligan), Elizabeth Anne Dexter (Patrick), Phillip James Sporrer, Owen Francis Sporrer, Matthew Joseph Miller, Christina Marie Miller (Laura Meng), Jennifer Lee Miller, John Padden Devine, Mary Catherine Mulvaney Devine, and three great grandchildren, Eleanor Elizabeth Gilligan, Patrick Joseph Gilligan and Theodore Jude Dexter. He is also survived by much-loved cousins and nieces and nephews. His grandchildren delighted him, and they will miss him with all their hearts. They loved hearing his opinions on everything and tales of his escapades. As one of his grandsons noted, “My grandparents taught me how to have fun.” His life story is one of loyalty and devotion to his family, friends, and countless pets (whom he preferred to most people). He showed up for all of them for more than ninety-five years. After graduating a semester early from high school, having just turned 18, he left everything he knew and joined the Navy. His terrible eyesight disqualified him from service, but he prevailed upon a cousin who worked in the recruiting office to provide him with the eye chart which he proceeded to memorize. He served in the Pacific theatre and after his discharge, he returned to Pittsburgh, graduated from the University of Pittsburgh on the GI bill and became a geologist. He worked as a geologist and a pipeline engineer until his retirement. In 1953, he married the love of his life, Mary Patricia Mulvaney, and they spent the next sixty-six years together, raising a family, and thoroughly enjoying a retirement filled with grandchildren, golfing and travel, which left him with a profound love of Ireland. He was cantankerous, opinionated, intellectually curious and engaged until the end. He read voraciously and was an avid follower of current events. He was appalled by the anti-science movement and delighted to cast his vote for the first female vice-president of the United States. He was a remarkable person who lived a remarkable life and we will miss him. Friends received at McCabe Bros., Inc. Funeral Home, 6214 Walnut Street, Shadyside on Friday, 2-4 and 6-8 pm. A graveside committal service will be held at Calvary Catholic Cemetery on Saturday at 11 am. Those wishing to attend, please gather at the main entrance to the cemetery. The family requests those who wish to express sympathy to consider making a donation to Animal Friends c/o Development Department 562 Camp Horne Road Pittsburgh, PA 15237. Condolences may be left at www.mccabebrothers.com