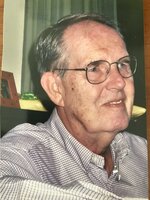 Joe Hutter celebrated his 90th birthday in May 2021 and his 71st Wedding Anniversary on October 7th. Joe died on November 13th following a long illness. Joe’s long life is a tribute to his ability to withstand adversity, to accept what life handed him and to do so with a smile or a quip for everyone. Joe had a very special sense of humor and was universally liked and admired by anyone with whom he came in contact, family, friends, neighbors or strangers. Joe’s at peace now in his heavenly home with his parents and two sisters who died in childhood, his many family members and good friends who predeceased him, and his daughter, Mary, who died at birth. Joe was a great salesman and in 1950 he sold his beloved wife, Nancy, on a Lifetime Adventure the likes of which neither of them could imagine. Adventures have their ups and downs, but with Joe it was always exciting and fulfilling as he and Nancy “followed their bliss” ‘til the end. Joe leaves behind eight sons and daughters of which he was extremely proud and loved very much: Paul (Marguerite), Martin (Joanne), Andrew, Marjorie (Russ), Jeannie, Vincent, Edward, Sr. (Susan), and Diane (Steve, Sr.). He also will very much miss his thirteen grandchildren: George and Hilary (Patrick), Alexander (Perrin) and Scott (Negar), Nathan (Ariel) and Rachel (Jeff), Simone and Gracie, Edward, Jr., Melissa, Joseph and Abby, his two step-grandchildren, Steve, Jr. (Amy) and Benjamin (Rachel) and his three great-grandchildren, Benji, Lydia May and Finnbar. Joe also leaves behind his only brother, Raymond (Marilyn), his sister-in-law, Janet, brother-in law, George (Phyllis) and many, many dear nieces and nephews. Joe enjoyed life. He loved reading, especially about the Revolutionary War and made great use of “sayings” when he gave advice, such as old bromides like “When walking a tightrope, you can only go forward,” “Don’t dwell on your mistakes, learn from them,” and “Life is like walking the dog—don’t think about it, just do it.” The one that he especially liked was “In a Marathon, to Finish is to Win.” Now, Joe has finished his Marathon and has won his race and, though we will feel the loss of him in our lives, we celebrate because we know he lives with God. Joe’s Funeral Mass will be held on Friday, December 3rd, at St James Church, Sewickley, PA at 10:30 am. Family will be there to greet attendees at 10 am. Following Mass and burial, there will be a luncheon. In lieu of flowers, please consider donating to Oakdale Foundation, 16 Oak Street, Great Barrington, MA 01230, or a charity of your choice.