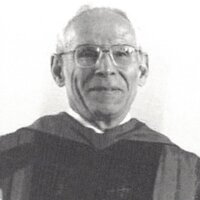 Dr. George H. Kehm Dr. George H. Kehm passed peacefully away at home on Saturday, January 8th, 2022 at the age of 91. Originally from Queens, NY, he received a B.Sc. from Queens College. An ordained Presbyterian minister (1954) he served as a campus minister at Michigan State University before turning to graduate studies. He holds a M.Div from Princeton Theological Seminary, and Th.M and Th.D degrees from Harvard University. After a year of study in Switzerland under the theologian Karl Barth, George began teaching at Pittsburgh Theological Seminary in 1961 where he remained until his retirement in 1996. He was installed as the first holder of the Snowden Chair of Systematic Theology in 1991. George served on the Presbyterian Church’s Committee on a Brief Statement of Faith and its Eco-Justice Taskforce. He participated with the Church during the Civil Rights Movement, making two trips to Mississippi to support voting rights efforts. He is survived by his wife of 66 years Mary Lou; children Daniel, Eva, Nathan (Jennifer), Joel (Leanna); grandchildren Jacquet, Corey, Justin, Michael, Alexandra, Dylan; his brother Walter (Carol) and his family. He was a member of the Church of the Redeemer (Episcopal) where he served several terms as vestry member and Junior Warden, as well as being a diligent member of their book club. He was active in the Western PA Conservancy where he acted as a Land Steward. His favorite pastimes were fishing, canoeing, gardening, and his books. He lives on in his family and his many students for his calm, sturdy demeanor, his appreciation of the natural world, his quiet ways of caring, and his love of knowledge. The service will be livestreamed. To view the livestream, please go to the funeral home website on Saturday, January 15th, a few minutes before 11:30 am EST, click on Dr. Kehm’s obituary tab, then scroll down to the Livestream tab on the left. In lieu of flowers, the family suggests donations in Dr. Kehm’s name to Church of the Redeemer, www.redeemerpittsburgh.org Condolences my be left on the funeral home website at mccabebrothers.com