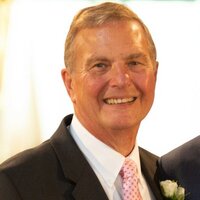 George P. Braem Age 74, of Claridge, formerly of Monroeville, passed away on Friday, May 27, 2022, at Forbes Hospital after being surrounded by family and friends all week. He was born November 10, 1947, son of the late Francis and Elizabeth. Beloved husband of Ruth for over 45 years; father of Lindsey, Doug and his wife Catherine; grandfather of Jack and a granddaughter due in July; brother of Charles and his wife Dorothy and his late brother Gene and late wife Susan; also survived by his niece Angela, her husband Mike and their daughter, his nephew Stan and his wife, Lauren and their daughters. He considered his family to be “the greatest blessing I could have.” And he was equally blessed to have incredibly close friends. A long-time employee of Wabtech Corporation, he was lucky to have recently had years of retirement. He and Ruth were avid travelers, and he enjoyed target shooting in his free time. Friends will be received on Thursday, June 2, from 4-8 pm at McCabe Brothers Funeral Home, 6214 Walnut Street in Shadyside. A Mass of Christian Burial will be held on Friday, June 3 at 10.30 am at St. Jude Parish, Sacred Heart Church, 310 Shady Avenue, also in Shadyside with Father Joseph M. Mele presiding. In lieu of flowers, memorial donations may be directed to Brother's Brother Foundation or your local food bank. Condolences may be left at www.mccabebrothers.com