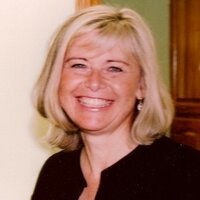 January 22, 1953 — June 6, 2022 Beverly was born on January 22, 1953 in Long Branch, New Jersey, to the late Harold and Bernice Poling. She was the wife of William Edward Cummins, the sister of Brian Poling, the mother of Marina Anne Kalis (Michael Belmonte) and Michael Thomas Edward Kalis (Leah Sack), and the stepmother of Daniel Cummins (Carrie and children Barrett and Greyson) and Ian Cummins (Michael Kravit). Beverly grew up in Pitman, New Jersey, and she and her older brother (and best friend) Brian spent their childhood summers on the Jersey Shore, where Beverly developed her love of riding waves with her dad and feeling the ocean breeze across her face. Beverly was a woman of many talents and varied interests. She graduated from Pitman High School and Glassboro State College (now Rowan University), where she majored in Communications, swam butterfly on the College swimming team, and was the newspaper photographer. She studied abroad in Oxford, England, where her intellectual curiosity and passion for books, maps, and photography blossomed. She pursued graduate work in American Studies at the University of Maryland in College Park, Maryland, where her enthusiasm for history deepened. She graduated with a Juris Doctor Degree from the University of Pittsburgh School of Law, where she fell in love with the rule of law. After law school, she worked as an attorney at the Pittsburgh law firm of Tucker Arensberg PC and, later, clerked for the late Judge Carol Mansmann on the United States Court of Appeals for the Third Circuit. Beverly also proudly served as the only woman on the Edgeworth Council in Edgeworth, Pennsylvania, as a long-time board member for the Women’s Center and Shelter of Greater Pittsburgh, and as a member of the Sewickley Garden Club. Beverly and Ed met through the Sewickley Academy community, where their children attended school. They soon fell in love. Their shared values and interests coupled with their unwavering mutual respect and devotion made them a beautiful husband-wife duo and committed teammates, who relentlessly supported one another in every imaginable way. They loved to explore; they were avid world travelers and their children recall many thoughtfully planned and extended visits to historical sites in Europe and elsewhere during which their parents’ enthusiasm and energy outpaced that of their children. Beverly’s unending love of photography has left behind a beautiful trail detailing her, Ed’s, and the family’s many adventures. Beverly was the proud and adoring mother of Marina and Michael. She loved being a mom and she embraced that role in every sense of the word. She instilled in her children a passion for justice, empathy, a love of learning, laughter, compassion, and adventure. Nothing brought her greater joy than simply being with her family and her extensive chosen family. Beverly leaves behind a legacy of unconditional love, friendship, curiosity, independence, and fighting for those who cannot fight for themselves. We have all breathed easier because she has lived. And she will be missed beyond words. Family and friends will be received at McCabe Bros Funeral Home, 6214 Walnut St. Pittsburgh, PA, 15206 on Wednesday, June 15 from 5:00 PM to 8:00 PM. Beverly’s funeral will be held at the Sewickley Presbyterian Church, 414 Grant St., Sewickley, PA, 15143 on Thursday, June 16 at 10:00 AM. For those unable to attend, the funeral will be live streamed through www.sewickleypresby.com. In lieu of flowers, contributions may be made to The Women’s Center and Shelter of Greater Pittsburgh (wcspittsburgh.org) and the American Society for the Prevention of Cruelty to Animals (aspca.org). Condolences may be left at www.mccabebrothers.com.