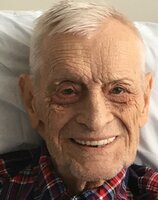 With family at his side on Thursday, October 20, 2022, Secondo “John” Dallimonti, age 92, of Shadyside, passed away peacefully. Father of Lynda Houston (the late Timothy), John Dallimonti (Rose), James Dallimonti, Donna Dallimonti Muenzer, and the late Michael Dallimonti; brother of the late Angela D. Baker and Domenic A. Dallimonti; also survived by grandchildren, nieces, and a great niece and nephew. John was a brick layer for many years working on numerous houses in and around Fox Chapel. Later in life, he went on to work for U.S. Steel at the Homestead Works. An avid Steelers fan, John never met a beer and a pack of Salem’s that he didn’t love along with his high school sweetheart, Bridget. He could often be found enjoying a smoke and taking in the neighborhood from his Shadyside porch. His nieces would like to thank the nurses and staff of Highland Park Care Center and Grane Hospice, who treated him with the utmost dignity and respect in his final days. Friends received at McCabe Bros. Inc. Funeral Home, 6214 Walnut Street, Shadyside on Friday, 4-7 pm. A Mass of Christian Burial will be held at St. Jude Parish, Sacred Heart Church, on Saturday at 10 am. Condolences may be left at www.mccabebrothers.com